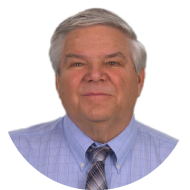 Frank Witkowski has known the value of hard work his whole life. He worked his way through school at Clarion University by working in the J&L Steel Company and by working as a professional motion picture projectionist at local theatres. It was during his time at Clarion that Frank met our founder, Sam Lucci.

Upon graduation, Frank taught science at his alma mater high school for nearly ten years. Concurrently, he became the business partner of Sam Lucci and they worked together forming several businesses in the construction and home remodeling industries.

In 1979, Frank and Sam started Bath Fitter of Pittsburgh. The business became the human behavioral science and R&D sector for what is now the Think More – React Less Educational Initiative. Frank has seen first-hand the benefits that thinking more and reacting less can have on individuals and companies alike. He asserts it is now time to bring Sam’s findings to the world.