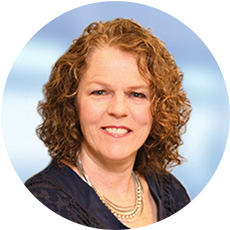 The eldest of seven, Mary Jo grew up on a Canadian farm, where she learned from an early age the virtues of self-sufficiency, dedication and teamwork. She graduated from Fleming College, became a Registered Nurse, and has spent over 20 years specializing in critical care. She has continually sought to advance her knowledge of ways to help people improve their lives, both physically and emotionally.

As she advanced her career, Mary Jo began working as a long term care insurance agent. During her first year, she was awarded the distinction of “Rookie of the Year” for her region. Though she was proud of the recognition, she felt that something was holding her back from being as successful as she could be. Mary Jo sought training through the Think More — React Less™ program and was so impressed with the positive results that she experienced that she knew this was the direction in which she wanted to move her career.

Mary Jo has been a Think More — React Less™ Attitude Coach now for more than ten years. Her education and professional experience have made Mary Jo an expert with the Think More — React Less™ program and using it to help dramatically change people’s lives. Mary Jo has made her career about helping people and it has earned her many grateful clients and friends along the way.